The CAPMOB 2.0 Erasmus+ project was implemented in the « Académie de Paris » between Septembre 2018 and February 2021. It aimed at developing vocational school students’ mobility and at highlighting vocational education.

The project CAPMOB 2.0 has been implemented to develop European and international cooperation for Parisian state vocational schools, and it has fully achieved its goals, despite a reduction of mobilities due to the sanitary context.

It falls in line both in continuation of the international developing in the ‘Académie de Paris’ and of the 2016 project CAPMOB-EFP to which half of the consortium took part, and with the current ambitions and perspectives for vocational studies. The project was based on the principle of tutoring between peer schools so as to engage schools that had never developed any project. 65% of the state vocational schools in Paris were part of the consortium CAPMOB 2.0. The composition of the consortium covers a large panel of vocational areas of specialties offered by the ‘Académie de Paris’ and highlights rare specialties which are specific to Paris. This project includes different levels of qualification, from vocational training certificate (CAP) to vocational baccalaureate (baccalauréat professionnel), local further training and degrees in arts and crafts. It therefore insures better employability for the students involved. The project was coordinated by the “Académie” on behalf of a consortium of vocational schools so as to support personnel and train them in project management and development. This scheme allowed communication at different scales so as to develop local networks.

During two years, 471 students have completed their work placement in a European country, and were accompanied by 246 personnel holding different positions. Most of these vocational training students, mainly from underprivileged backgrounds, had never been given the opportunity to go abroad before. Thanks to the project, they could experience work placement (in a company or a training organisation) in a European country. Mobilities took place to 16 different countries, for a period of 12 to 62 days. Some incoming mobilities of experts were also implemented so as develop professional practices and address a wider audience of students.

[MAP OF CAPMOB 2.0 VISITS PER COUNTRY] 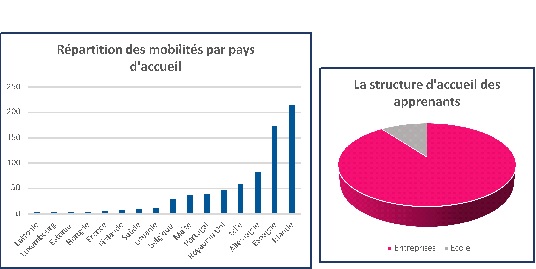 European mobility for 471 students and 246 supervisors 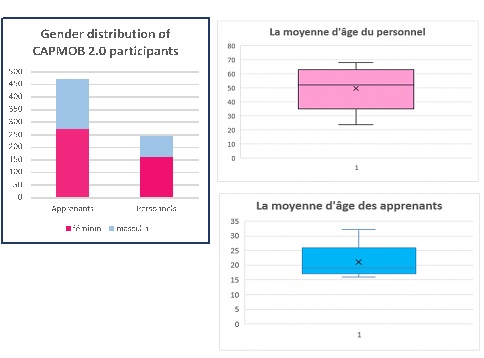 REPRESENTING THE DIVERSITY OF VOCATIONAL EDUCATION

The CAPMOB 2.0 project federates 33 public vocational schools in the ‘Académie de Paris’. They represent a diversity of fields, from fashion and beauty, customer and user relationship to hospitality, catering and engineering. 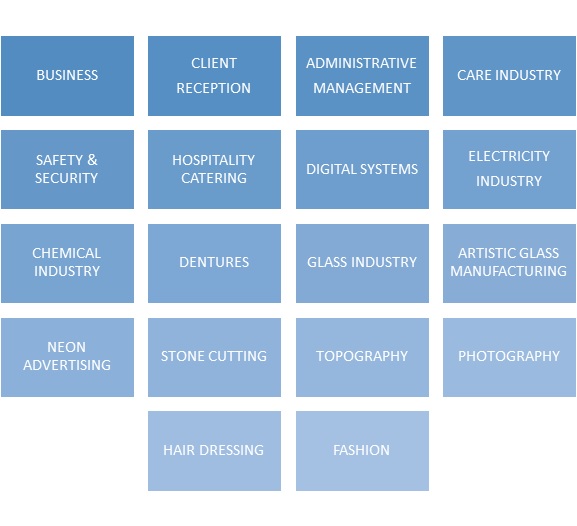 CAPMOB 2.0 participants have diverse backgrounds, thus embodying the variety of CAPMOB 2.0 partner schools in terms of professional fields and locations.

Students taking part in the program are of various levels: CAP (Professional Aptitude Certificate), professional baccalaureate, BMA (Craftsmanship Degree) and FCIL (Local Initiative for Continuous Education). This last diploma can be obtained after a baccalaureate but does not grant a higher level of qualification.
Niche sectors and rare know-how are also represented, such as leather and fur clothing, ornamental feathers and millinery. 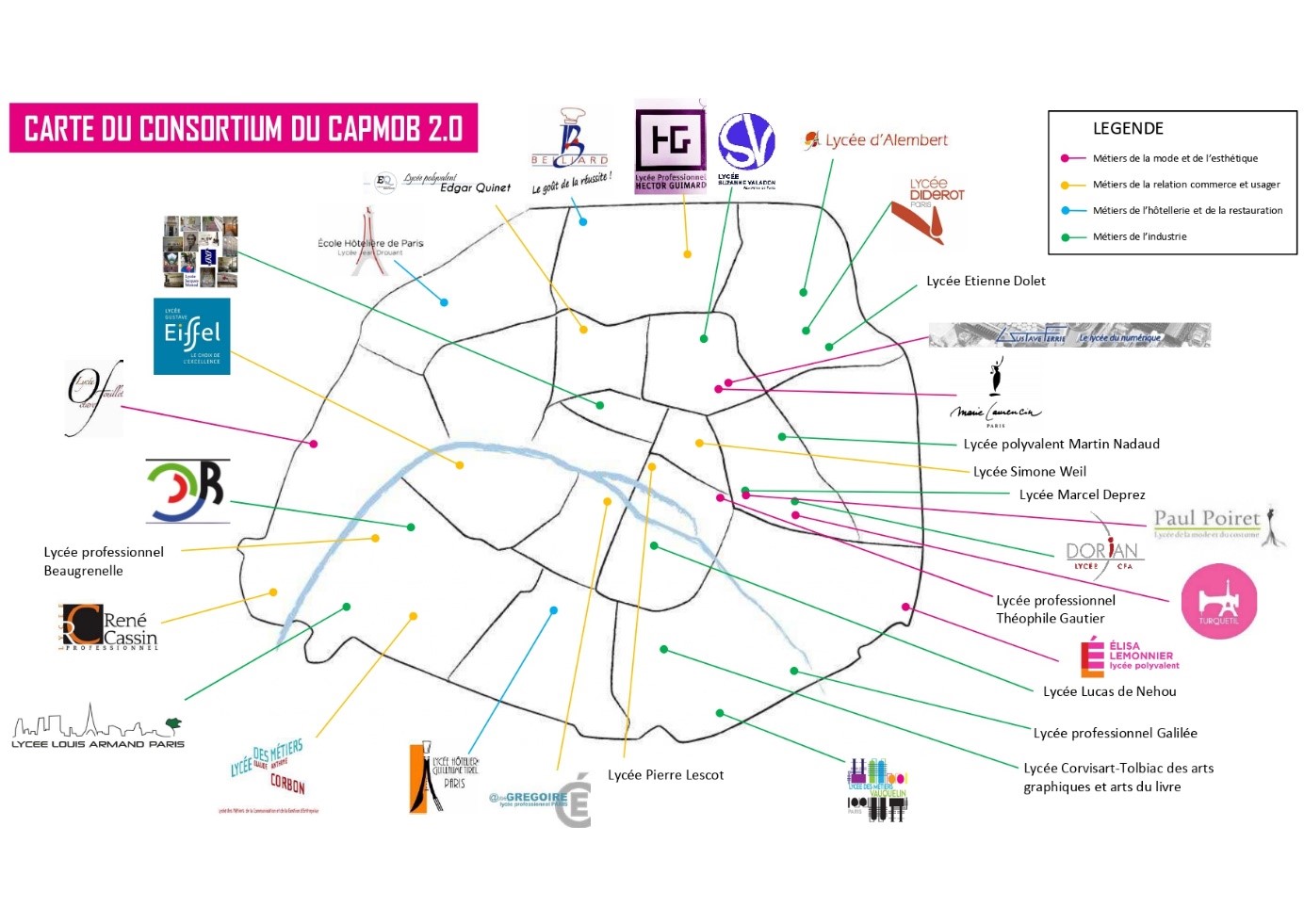 AN EXTENSIVE NETWORK OF STAKEHOLDERS

A network of European schools and partners

CAPMOB 2.0  was based on a tutoring system between schools that created a local synergy. Vocational schools that have already gained experience in organizing work placements abroad for their students became tutors for schools having just enrolled in the program. Working in teams of two or three vocational schools has helped share and mutualize good practices (processes, quality, preparation) and contacts for hosting and intermediary organisations.

Fashion vocational high schools, for example, managed to establish unique work relationships which contributed to the emergence of a vast network of institutions devoted to the fashion industry, including chambers of commerce and mutualized hosting organisations.

Thanks to this distribution in teams, educational staff was also able to join forces on an ambitious project. It also applied to school accountants who exchanged and shared practices to make it easier for students and teachers to go abroad while also respecting the constraints of public accountancy. 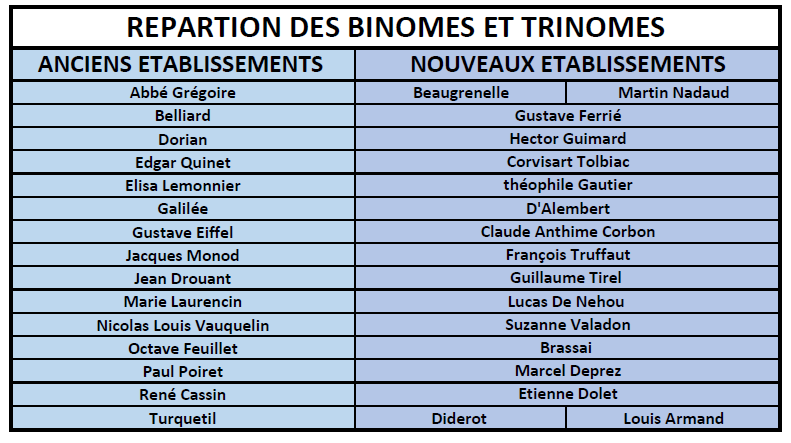 A network of mobility actors

Educational teams are deeply involved in making their school and students open up to Europe: creation of partnerships, appointment of a referent teacher for European & international action among the staff, participation in KA1 and KA2 Erasmus+ projects… Besides, supervisors see these projects as a way to evolve in their career: they seize this opportunity to follow dedicated continuous courses accessible through the PAF (Academic Training Scheme). Some of them also obtain the CLIL certification to teach their field in a foreign language. All these resources allow teachers and educational team members to discover and evaluate professional techniques, put their skills into perspective and find renewed energy in their daily work. They also gained experience in project management, thus building reliable and sustainable processes.

These processes help vocational schools build partnerships and projects beyond the Erasmus+ program, thus fully including Europe in the schools’ core values and objectives, for example through partnership agreements with European schools and institutions.

At the administrative level, the departments for vocational and continuous education (DAFPIC and GIP-FCIP), the department for European and international relations (DAREIC) and the Erasmus+ directorate capitalized on their smooth and transparent work relationships to share managing responsibilities. There were therefore able to work collectively and efficiently on CAPMOB 2.0. The skills they developed along the way gave immediate results but also shaped new possibilities for helping vocational high schools open up to Europe.

A ripple effect on the local level

The CAPMOB 2.0 project contributed to the emergence of a new momentum for partner high schools, but also on the local level. The whole project helped highlight the quality and the diversity of the vocational education, with a focus on niche sectors that are iconic of French craftsmanship and know-how. The CAPMOB 2.0 project also helped schools to open up to international partners beyond European borders.

A PERSONAL AND PROFESSIONAL OPPORTUNITY FOR STUDENTS

Vocational students can experience European mobility too! Camille explains how the European program Erasmus+ enabled her to carry out several work experiences abroad. Thanks to the Erasmus+ CAPMOB 2.0 project, managed at the Parisian level by the GIP-FCIP of Paris and the Erasmus+ directorate, vocational education students can gain professional experience in different European countries every year. For example, Camille went to Germany during her vocational baccalaureate training and to Italy for her entertainment technician diploma. She now reflects on the benefits of her experiences abroad and debunks a few myths about travelling: yes, it can be that easy!

The participants mainly mention the discovery of professional techniques and practices as well as the acquisition of language skills, in the language of the hosting country and in the main working language. At the very least, this experience abroad helped them reaching a new awareness about the benefits of learning foreign languages.

92% of the participants thus think they have improved their language skills. A majority of them studied only one language  in their curriculum, predominantly English. But one of the unexpected impacts of the project has been the introduction of a second language in some institutions to allow for linguistic preparation before the mobilities and to ensure the continuity of learning outcomes.

European mobility has a strong impact on participants' career paths. Thus, among the students who participated in the CAPMOB 2.0 mobilities, 95% of those enrolled in the baccalaureate passed their exams, and 100% of those enrolled in the Professional Aptitude Certificate passed also , which is a very high rate for this educational vocational track often welcoming students with learning difficulties.

The participants gained open-mindedness, self-confidence and adaptability during their professional experience abroad, which contributed to opening new educational and professional perspectives for the future, even for students who previously wished to drop out. Some of them were able to enroll in a superior technician diploma (BTS) or in other tracks in the academy of Paris, while others were offered short-term contracts after their internship or graduate job offers.

Working abroad for a few weeks enables students to strengthen their professional skills, but more importantly their soft skills. Choosing mobility means challenging oneself, pushing one’s boundaries and accepting to question one’s capabilities. The participants were able to adapt to another culture, thus gaining autonomy in a context that was unknown to them and in which they had to actively engage with others.

Getting involved in a personal project on the long term, from the application phase and the internship period to the experience review is a real victory for some students. 86% of participants say they have improved their self-confidence, which is a real success for them, and 98% are ready to repeat the experience. The 100% satisfaction rate of the students confirms these positive results.

CAPMOB: A NEW BRAND IN PARIS

The CAPMOB 2.0 project is in total adequacy with the new academic and national priorities of the vocational education reform, making it easier for vocational high schools’ students to travel and work abroad. The number of Parisian vocational high schools offering European mobilities doubled between 2016 and 2018, thus building a dynamic that is set to last and allowing CAPMOB to become a real brand in the ‘Académie de Paris’.

Hence also the enrollment of many new high schools in the program and the emergence of five new projects in 2020: 4 mini “CAPMOB” projects focused on specific sectors, and the CAPMOB 2.1 project, which brings together neophyte high schools willing to enroll in a local Erasmus+ initiative. This new Erasmus+ offer will help strengthen the processes, networks and skills that were initiated the previous years. There is no doubt it will also enhance the international dynamic of the academy, with new travel opportunities, including experimental incoming mobilities for foreign professionals who will teach iconic techniques in hospitality and catering vocational high schools in France.

The CAPMOB project, going ahead in 2022 – An example of incoming mobility

Opening up to Europe and the world while discovering a new professional world: the Tirel vocational high school made it! Thanks to the Erasmus+ CAPMOB project, the students were trained by Italian professionals who taught them how to make pasta and distill digestives: this masterclass with a double expertise allowed the students to gain new professional skills. 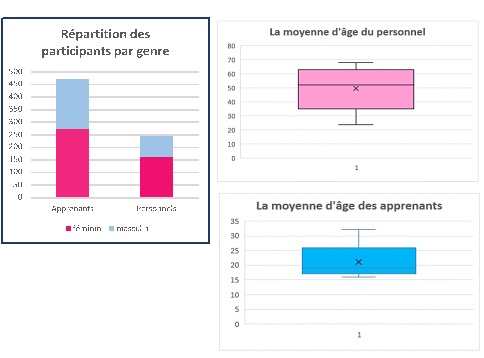 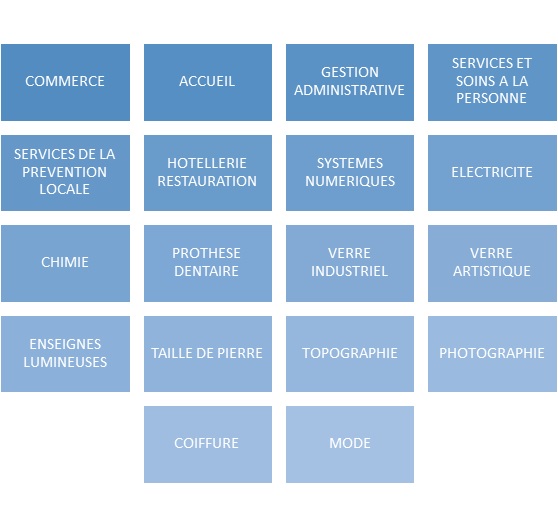 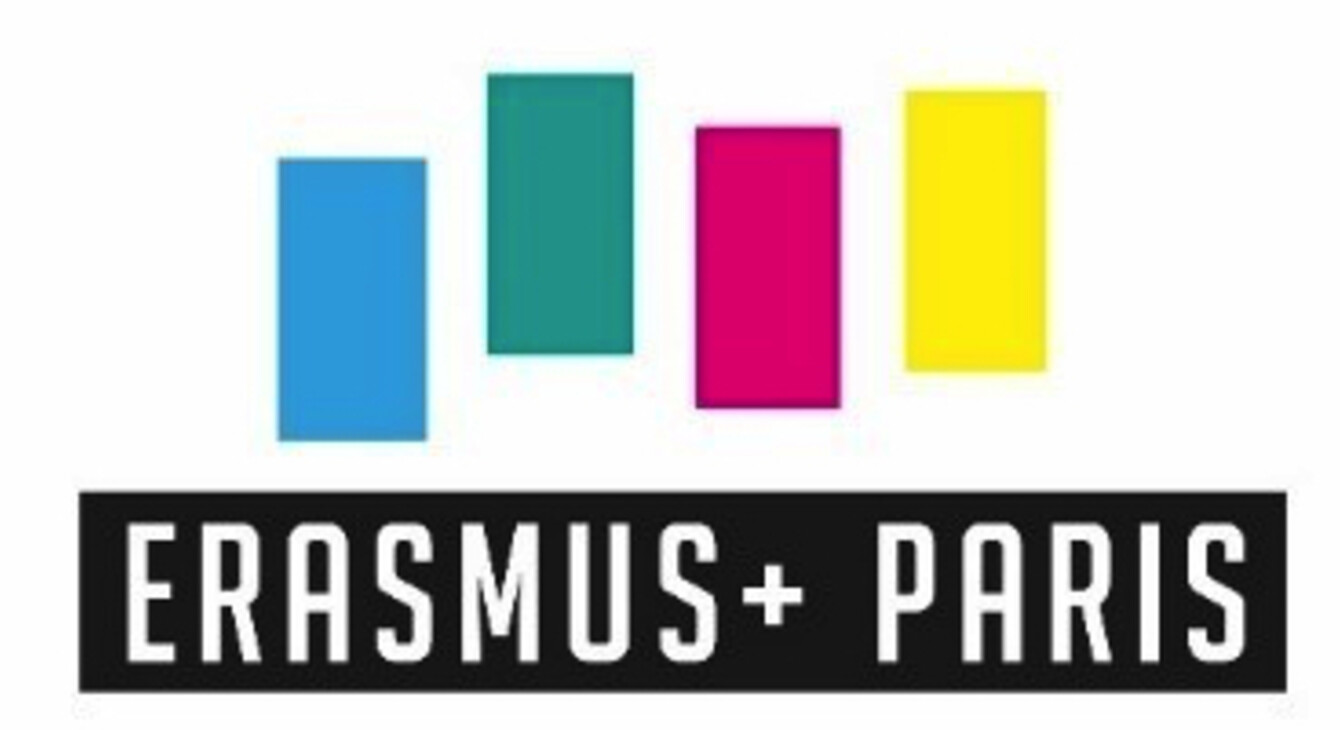 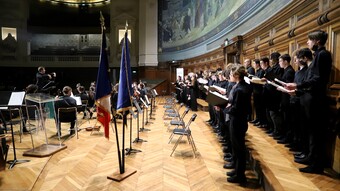 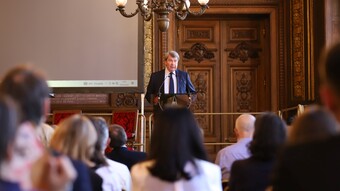 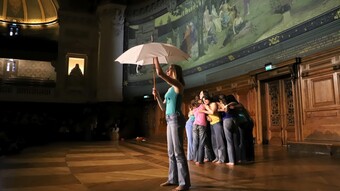